Much doubt and uncertainty envelope many of the events which go to make up the early history of a new country. The solitary wilds of an unexplored region afford few opportunities for making those notes and records which as time advances become valuable to the seeker after historical truths; and as a general thing the explorers and settlers of our great West have been men little accustomed to literary pursuits, and less desirous of literary honors. Besides, the arduous labors and engrossing duties of pioneer life leave little room or opportunity for that quiet and leisure indispensable to scholarly habits. Thus it is that a large portion of interesting events and reminiscences of our first settlements have faded from the memory of man, or are only handed down as traditions distorted by this uncertain medium, or mystified by the lapse of time. So it is with the pioneer history of Penn township; for we have found conflicting statements in some particulars regarding pioneer days and events; but by interviewing the most reliable authorities, the pioneers themselves, we are enabled to give a sketch which we hope will meet the approbation of all. 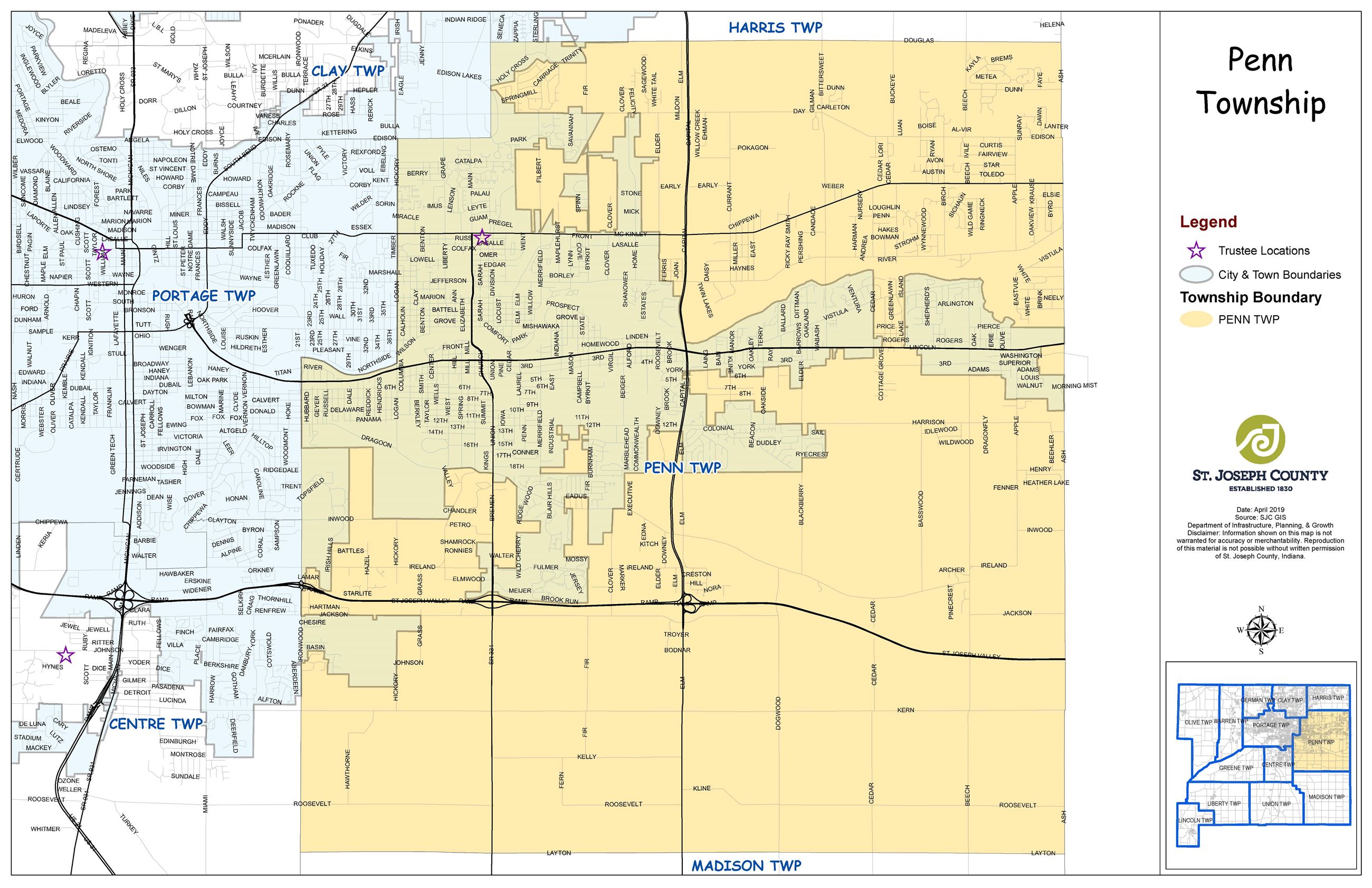 Penn township is a timbered country, and in the pioneer days when there were no railroads, telegraph wires, or even wagon roads, it was difficult for the settlers to go from one cabin to another without becoming lost. On one occasion a gentleman had gone some distance from home to a near neighbor's on an errand, and night overtaking him on his return he got lost, and wandered in the dense forest all night, while the wild lightnings flashed around him in a threatening manner. He was not found until late the following day. If the thick timber had been the only barrier to a rapid growth of settlement and improvement in this township, the obstacle would have soon been overcome; but there was a large amount of marsh land in the township, and it was almost impossible to traverse the marshes with a team; and the traveling was done by circuitous routes to avoid these marshy tracts of land. Many of these marshes have been drained, and now constitute a portion of the most fertile land in Penn township. The same land that now yields abundant crops was then a quagmire and a pit for explorers to fall into. It would be in keeping here to remark that there is a large marsh extending from the St. Joseph river near South Bend toward the southeast, almost the entire length of the township, or to within a half mile of the eastern line of the township. This marsh varies from three fourths of a mile to two miles in width. Near its center is an elevated, oblong tract of land consisting of 200 to 300 acres, which is tinder cultivation and known as the "Island." This peculiarly shaped marsh is regarded by the citizens of this township as once forming an arm of Lake Michigan. This is perhaps truce, as the indications are such as to lead any thinking person to such conclusions.

During the first settlement of the township the pioneers got their mail at Edwardsville, Cass Co., Mich., which was carried on horseback from Fort Wayne to that point. It here intersected the mail route between Detroit and Chicago. The residences of the pioneers consisted of log huts, and some were so poor that they made bedsteads of round poles. They did their cooking by the fireplace. A stick was fastened across the chimney at some distance above the fire, and the kettles were suspended from this by means of iron hooks or chains. The bread was baked in a "Dutch oven."

Although these sturdy pioneers of the forest had to undergo many privations, they were a jovial class of people, and had their amusements and enjoyments, though in a rustic way, as do the people of the present day. The mill at which they first got their wheat ground was located below Niles, Mich.