The early history of South Bend, Indiana, bears a decidedly French cast. The French explorer La Salle landed on the banks of the St. Joseph River, at what is now Riverview Cemetery, in December, 1679. Two years later, he met with Native American leaders at the same site and concluded the Miami Treaties with them.

Nearly 20 years later, the Very Reverend Edward Sorin, along with six Catholic brothers, founded South Bend's most famous institution, the University of Notre Dame. Thirteen years later, they were joined by St. Mary's College, which was moved from Bertrand, Michigan. The University of Notre Dame is considered to have one of the premier college football programs in the country. The College Football Hall of Fame is located in South Bend and opened its display to the public on August 25, 1995.

South Bend grew industrially over the 20th century, with major manufacturers like Bendix and Studebaker leading the city's economic advance. Gradually, the loss of many of South Bend's core manufacturers presented challenges to the city, but the number of small manufacturers has expanded in recent years. 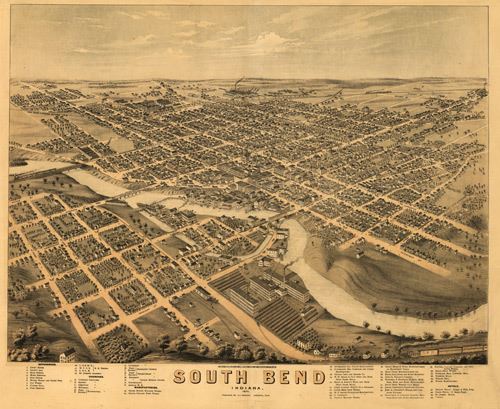